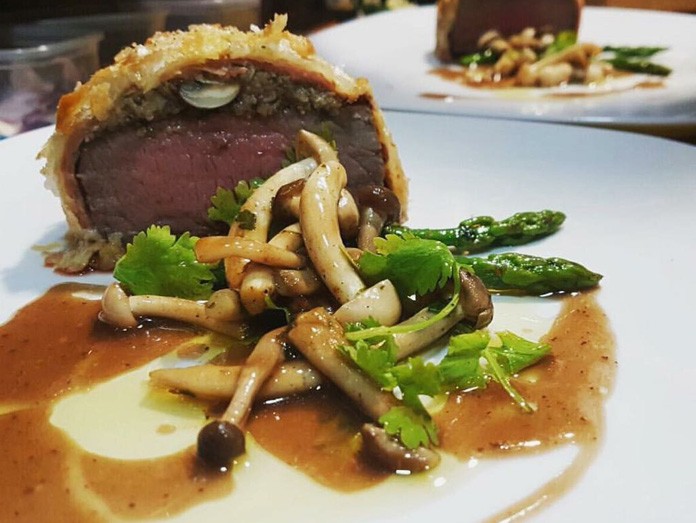 There has always been a lot of controversy over where the name Beef Wellington actually comes from. One assumes that it came from the 1st Duke of Wellington a great man and the UK´s prime minister in 1828 but some say it was a dish served in Wellington in New Zealand for a civic reception in that era.

Either way, it is one of the most wonderful dishes to eat and very easy to prepare and cook.

In 2004 I took over at Brocket Hall in Welwyn Garden City near St Albans, London. Brocket Hall was the home of the eccentric Lord Brocket who some will remember for his time on I’m a celebrity get me out of here! Others may remember the burying of his Ferrari collection! Either way, Brocket Hall is steeped in history.

Either way it has the elegancy of a Royal dish not least because I have cooked it for various members of The Royal Family who were always delighted with the perfect results.

At The Little Geranium in La Cala De Mijas we always have Beef Wellington on our tasting menu. There is only one real Wellington, the one I cooked at Brocket Hall and its here it is for you to try for yourself.

From Monday the 9th of November my beloved husband, our chef and patron Steven, has to have a series of operations to remove thrombosis in his legs caused by extensive time on his feet over many years. He also has a heart murmur which now needs urgent treatment.
All this means that we have no option but to close until Steven has fully recovered. At this time we don’t know when that will be but we will aim to re-open when Steven can walk again.
As you know Steven loves creating and cooking his special food and will miss it during this time as well as miss seeing you all. Thank you everyone for your support and we all look forwards to seeing you as and when possible again.
This site uses cookies: Find out more.